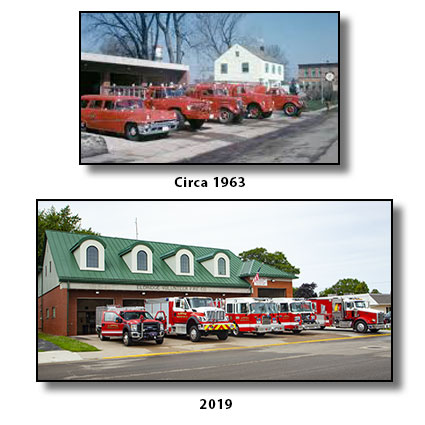 On May 28th, 1904, a fire started in Eldridge about midnight. Flames were seen in the J.H. Wiese Hardware and Implement Store and the whole town was roused to the sound of a ringing school bell. The town people were unable to stop the progress of the flames because of the lack of fire protection. The fire consumed a large saloon, a hotel, two residences, causing over $40,000 in damage.

From the flames, in 1905, the Eldridge Volunteer Fire Department was born. The citizens of Eldridge decided that a good portion of property lost on May 28th, 1904, could have been saved from fire with proper fire protection. The company consisted of fourteen charter members. The first chief was Herman Ewoldt.

Needing finances to operate, each member paid the treasurer a $2.00 membership fee. Their first treasurer's report had a balance of $28.00. Their ruling at that time was that the treasurer of the company had to be bonded for a sum of $100.00. For a number of years, each fireman paid annual dues of $.75 plus a $.50 fine for not presenting their key for the hose house at the meeting, plus a $.25 for not attending fire practice. Their other means of income was mostly by holding public dances.
The first firefighting equipment of the company was one hose cart and one ladder cart which they were able to purchase with the help and cooperation of the town council. The first equipment was kept at the J. H. Weise Company.

In January of 1905 their constitution and bylaws were adopted and printed.

In 1910 the company became owners of a new bell and tower. In 1913, they had made enough progress to invest in a two-wheeled chemical rig, which in those days was considered a very effective firefighting unit and still can be seen at the museum by Scott County Park. On about 1918, Eldridge Volunteer Fire Department extending out into the community purchased a Ford Model T chemical fire truck. At this time, they sold fire protection to farms owners at a cost of $25.00 per run.

In 1923, they went out soliciting farm owners to sell them fires service at the same cost of $25.00 per farm for which they received a fire service certificate for the life of the truck, which was a two chemical tank with a reel mounted on a truck without a cab.

Struggling with old fashioned equipment until 1935, when a new influx of ideas, many brought in from attending firefighting schools held in Ames, Iowa each year, the Eldridge Volunteer Fire Department learned new ways of fighting fires. With the support of the community and surrounding areas, they were able to purchase new equipment including a 1935 Dodge truck with a 200-gallon booster tank and a front-end pump.

In 1947, they purchased a White truck with a 600-gallon tank and both front and mid-ship pump. Adding to their equipment roster, in 1950, a White truck was purchased with a front-end pump with a carrying capacity of 5000 gallons of water.

Recognizing the need to be able to perform EMS operations, in 1951, a resuscitator was purchased. In 1954, a communications system was installed. Each truck was equipped with a mobile unit able to communicate on local, county and state frequencies.

In January, 1961, the Eldridge Volunteer Fire Department reorganized, changing the constitution and by-laws to a presidential type that still exists.

As an incorporated and non-profit corporation, the fire company has provided fire and EMS protection to the City of Eldridge and the surrounding community for over a hundred years after it was founded.

The present fire station was built in 1963 and is located in the middle of town. Originally, a 4-bay fire station, it had 21,750 square feet of usable space. The station was renovated and expanded in the early 2000's. Today the station features state of the art firefighting equipment and vehicles to keep the Eldridge community safe. 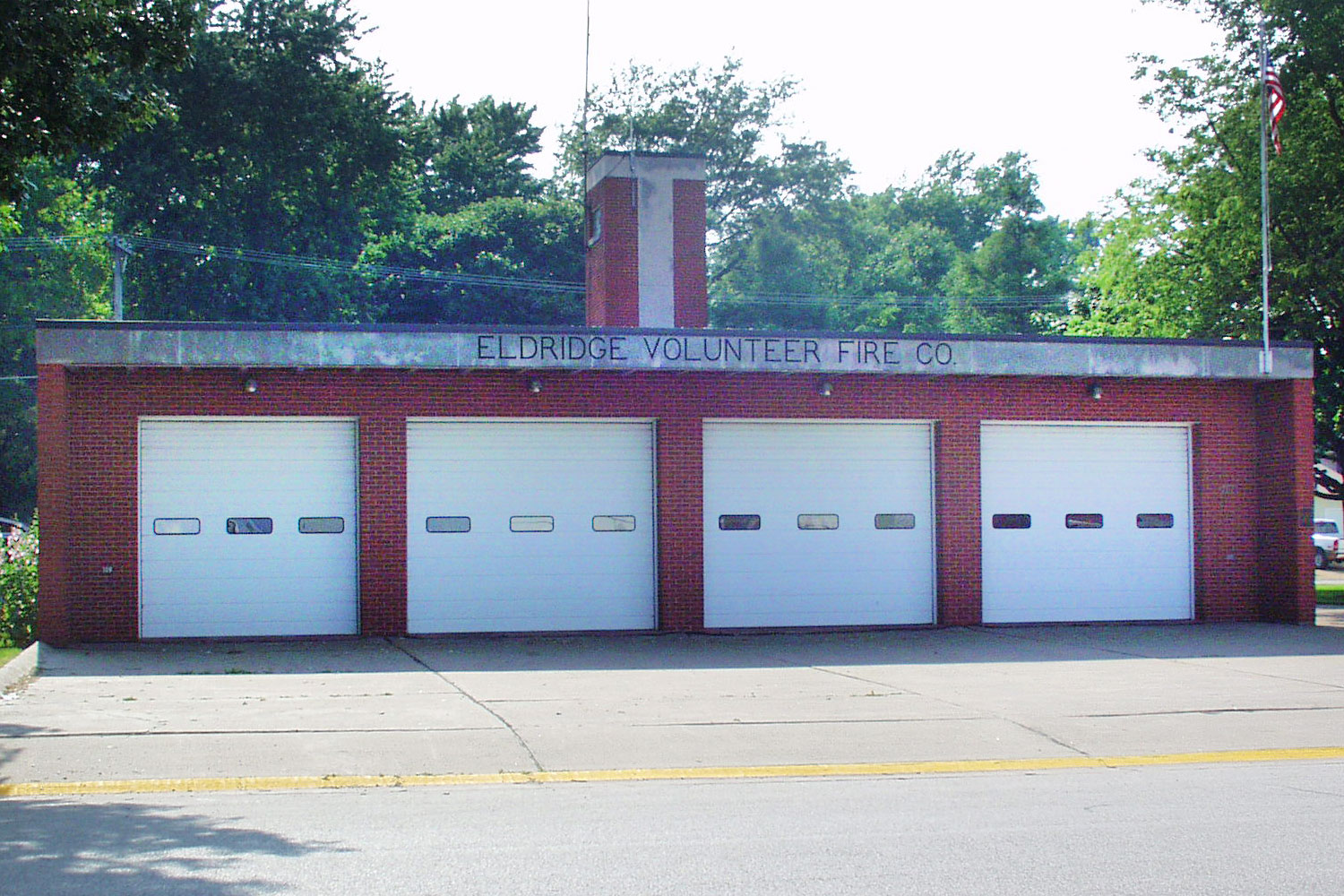 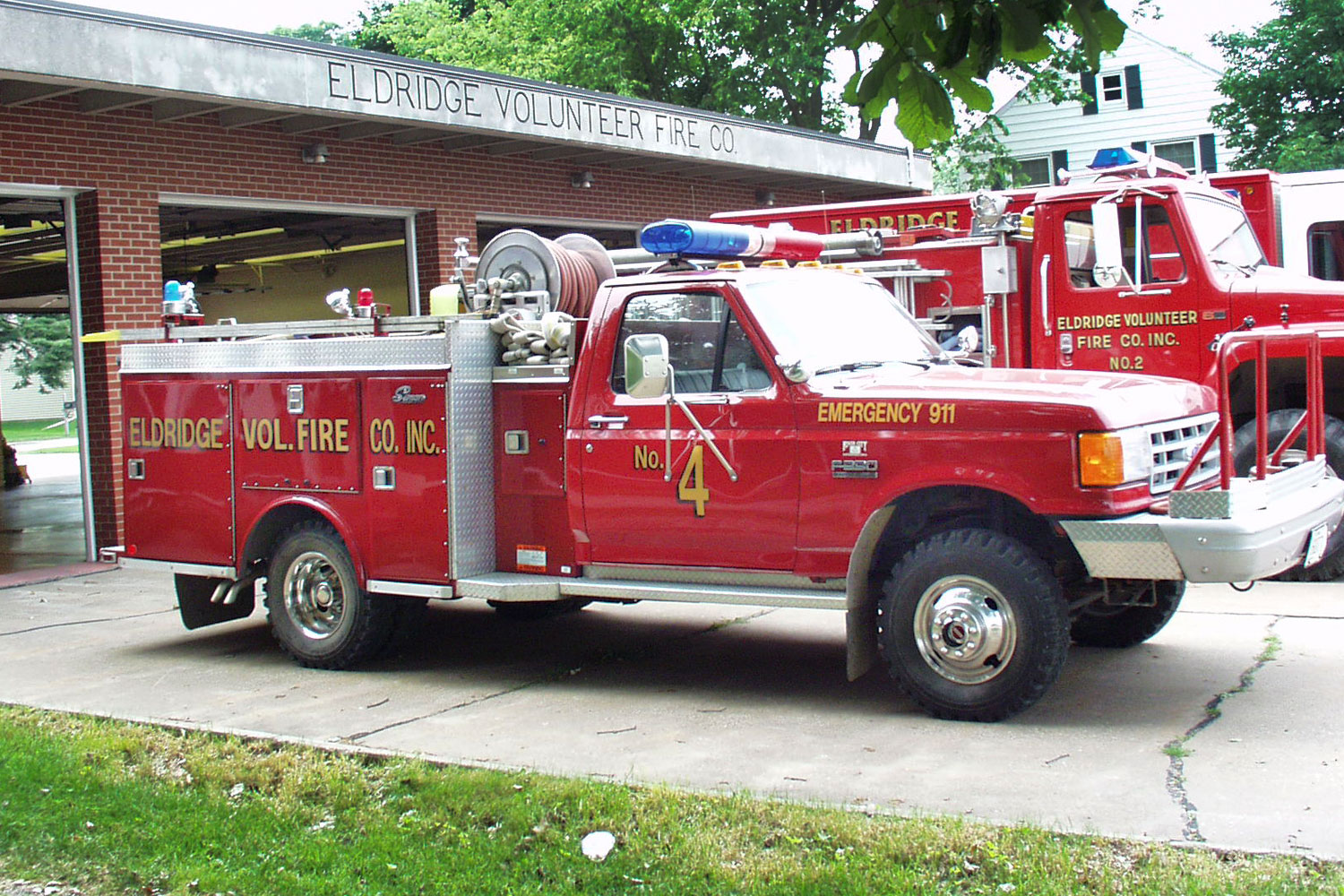 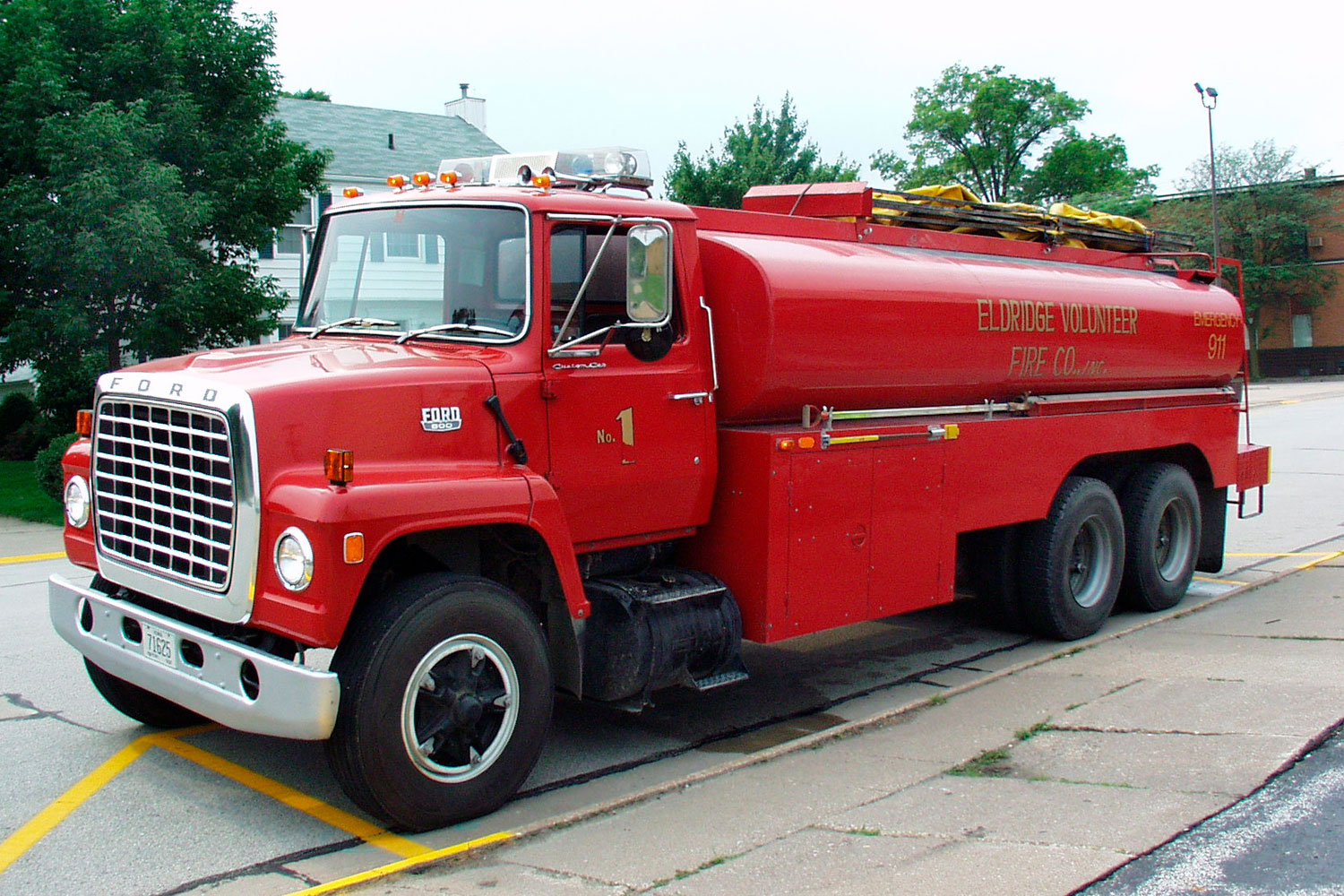 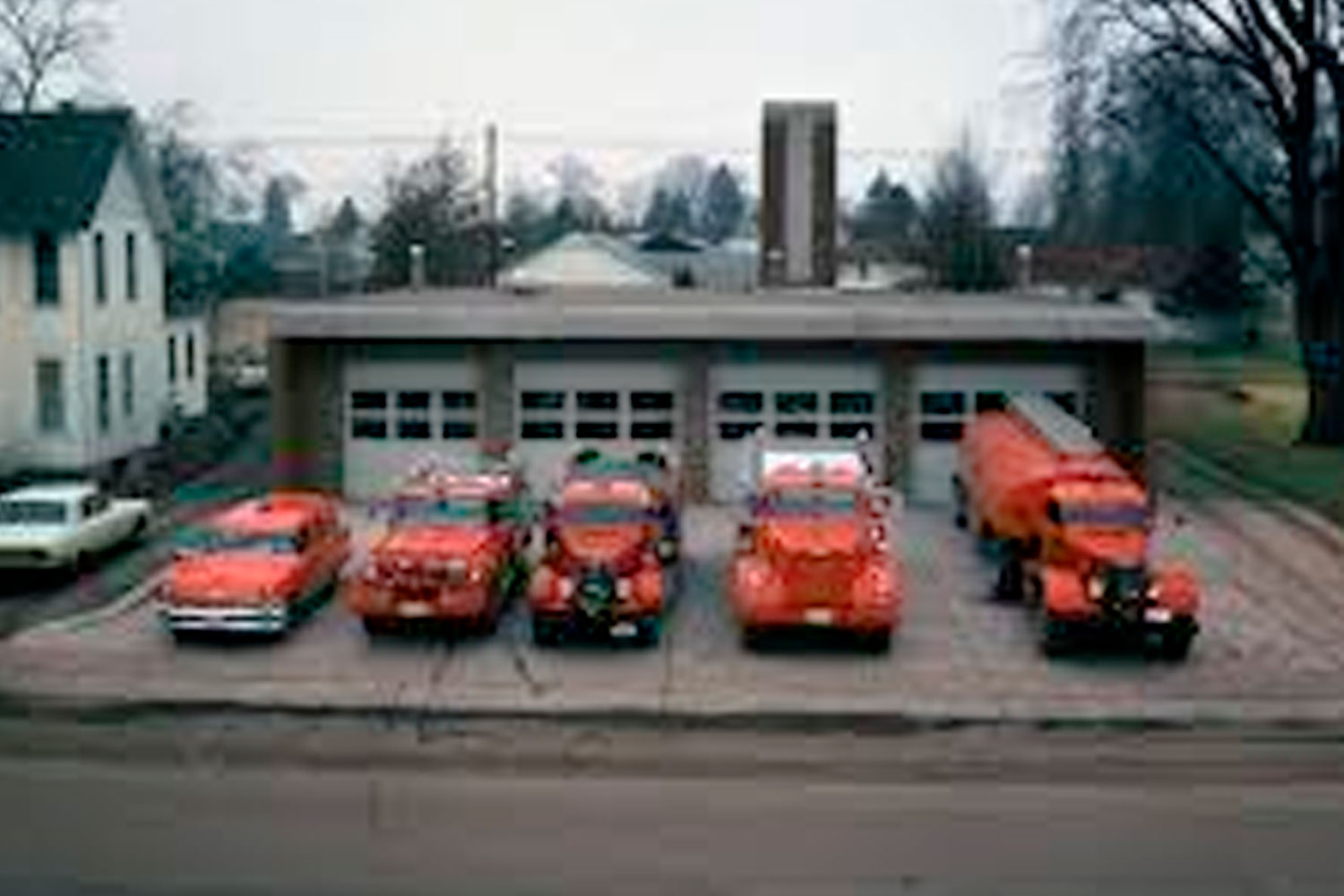 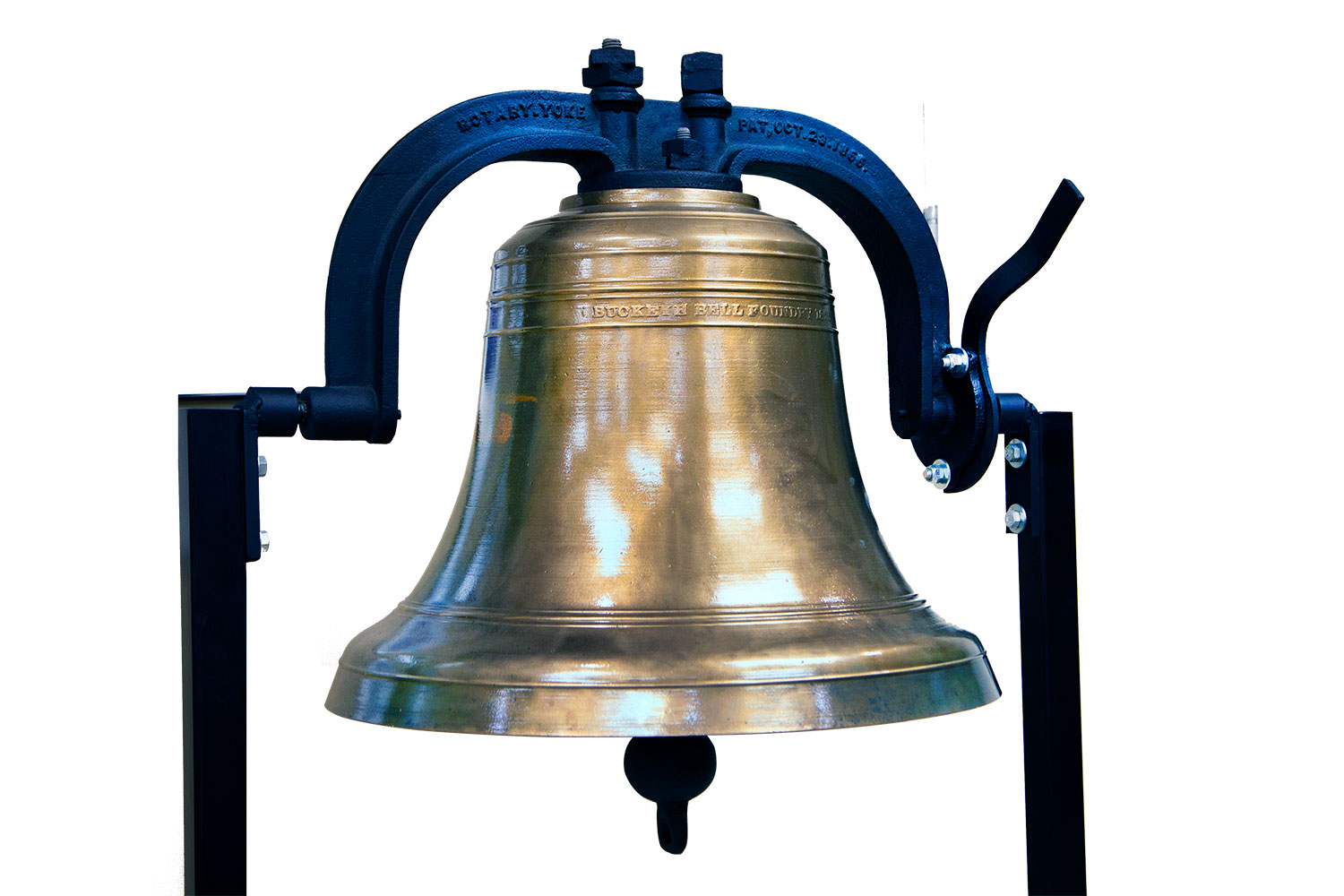